Alinghi and Realteam Sailing make the best of light winds 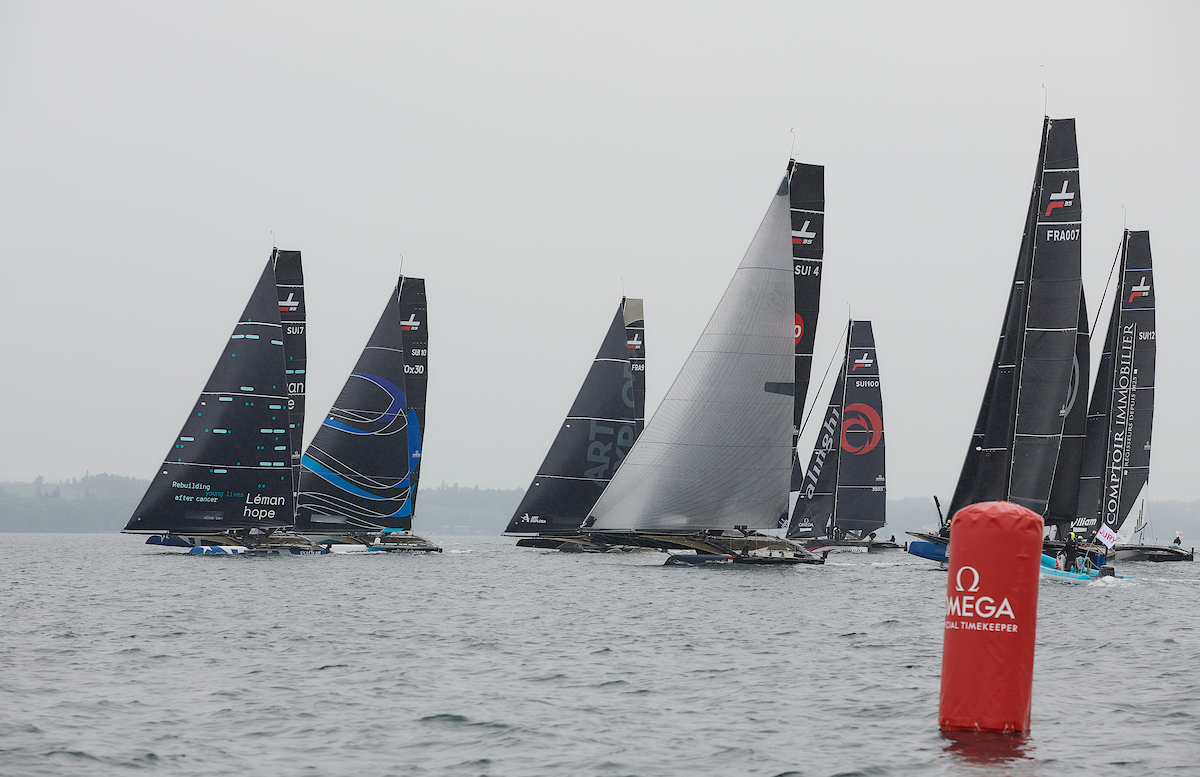 After day one of the TF35 Opening Grand Prix in Nyon was abandoned due to lack of wind, PRO Benoit Deutsch and the race committee had the TF35 teams on Lake Geneva early today to make the most of a small weather window.

First out of the blocks in race one was Guy de Picciotto's Zen Too. Helmed by Frédéric le Peutrec with Tanguy Cariou calling tactics, the team hit the start line at speed, committed to the left up the first beat and crossed ahead of the fleet to lead around the top gate. Their success, however, was short-lived as no more than 100m into their downwind leg, Picciotto's team experienced a problem that caused them to retire from the race.

ZEN Too out of the running, Realteam Sailing and Alinghi played a crucial shift downwind and broke away from the fleet. Making the most of the breeze in the centre of the course, Realteam kept a comfortable lead over Alinghi until the finish to win race one.

Jérôme Clerc, Co-Skipper of Realteam Sailing explained: "We sailed cleanly, so it's been a positive day for the team. We are super happy to be racing again after a year; we've missed the adrenaline".

The north-easterly breeze piped up to 8 knots for race two, and again it was Realteam Sailing and Alinghi clear out in front. The competition was then on between ZEN Too, Spindrift and Team SAILFEVER, who rounded the second windward gate within touching distance of one another. A costly port-starboard penalty for ZEN Too allowed Spindrift and Team SAILFEVER to get ahead and finish the race in third and four, respectively, with ZEN Too taking fifth.

In the third and final race of the day, Alinghi had again pulled out a significant advantage by the top mark, although this time chased by Frédéric Jousset's Team SAILFEVER with Loïck Peyron at the helm. The newest crew to join the class Team SAILFEVER was able to hold on to second place until the final moments of the race when they slipped from second to fourth, overtaken just before the finish line by Realteam Sailing and Spindrift.

The unsettled 6-8 knots on the lake the racing conditions were testing for the teams as Alinghi tactician Nicolas Charbonnier explains: "The conditions were at the point where the boat hesitates between foiling and staying in the water. These are the most challenging moment when racing these boats because you have to choose when you decide to go for the foil or not".

With the weather window closing and the 6-knot breeze quickly disappearing, race management decided to call it a day after race three and the fleet returned ashore.

After day two of the TF35 Opening Grand Prix, Alinghi and Realteam Sailing are the stand-out performers, with a four-point gap back to Dona Bertarelli and Yann Guichard's Spindrift, and in turn, four points ahead of Frédéric Jousset's Team SAILFEVER.

The competition is much closer in the second half of the fleet. Ylliam XII - Comptoir Immobilier and ZEN Too are tied on points in fifth and six, with Zoulou two points behind in seventh.