Loick Peyron on the TF35

When it comes to multihull racing there are few things that French veteran Loick Peyron hasn’t done and won. Over a career spanning 40+ years, the middle son of the famous La Baule family has won all of the major French offshore multihull races, including – finally – the Route du Rhum, wrestling his 32m long trimaran across the Atlantic singlehanded to victory in 2014. He has set Jules Verne Trophy records aboard a 40m trimaran, steered a 34m catamaran in the America’s Cup, won the OSTAR upwind across the Atlantic a record three times, dominated the ORMA 60ft trimaran circuit…the list is both very long and very impressive.

Peyron, now 61, has been also highly adept racing multihulls inshore. Last year he completed the first full season of racing for the TF35s with Frédéric Jousset’s Team Sailfever, but remembers fondly the success he enjoyed winning the first ever event for the D35 catamarans back in 2004 with Team Red Zebra Seven, then claiming his first Bol d’Or victory the following year with Nicolas Grange’s Okalys team (he returned to the Okalys team again in 2018, that time with Grange's son Arnaud helming, when they nearly again won the Bol d'Or Mirabaud).

Peyron has some experience of flying catamarans ranging from the Artemis AC72 in San Francisco to Flying Phantom dinghies and a few hours in a GC32, but of the TF35 he notes: “It’s really different to all of the other ones, because of the automated flying systems and because the TF35 is made for the light conditions of the lake [Lake Geneva]. They very well fulfil the design brief, because the average wind on the lake is between 6 and 8 knots and in 6.5 knots of wind you can fly. And the beauty also is that they will fly upwind.” According to Peyron the TF35 will fly upwind in 8 knots, but the tacking angles aren’t great in that little wind. While the crew adjusts the course trim of the TF35’s foils, the smaller, split second changes to the foil trim are automated, with the intention of making the foiling smoother, the ride height more consistent, etc. 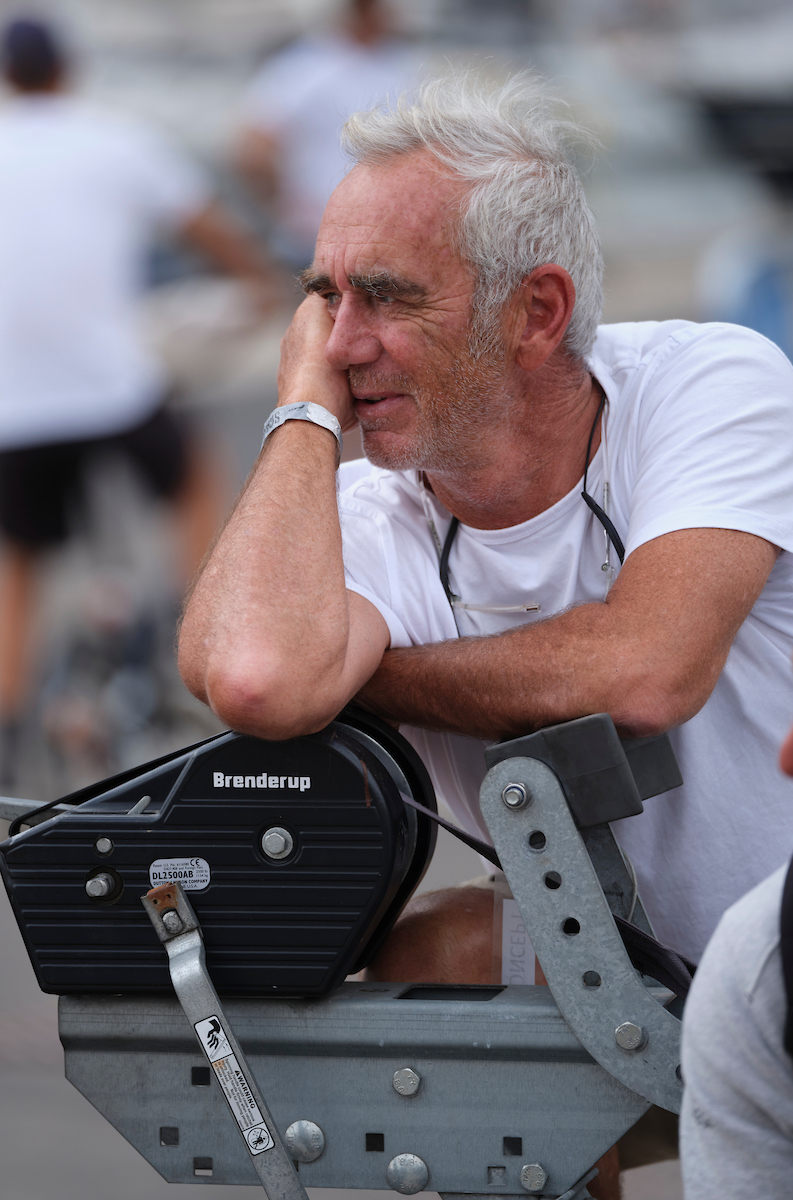 In terms of what will certainly become race winning skills in years to come, Peyron adds that they are still on a steep learning curve in terms of perfecting manoeuvres like foiling gybes and tacks, that are TF35-specific thanks to the automation. “With the jib it is easy but with the gennaker it is hard. Some good teams are able to do it. We have had to change our play book.”

According to Peyron sailing upwind, they typically heel the TF35 to weather, as Moth sailors do, with the weather hull even kissing the water at times to get the maximum amount of lift from the boards/foils to prevent leeway. However bringing the platform back to the horizontal during a tack means that at present the TF35 loses power making it hard to stay airborne. So in marginal foiling conditions, tacking must happen as quickly as possible and at present some crews are better at carrying out such manoeuvres than others. Inevitably there is a wide skill range across the fleet at this early stage in the class’ development.

So does Peyron think that ‘natural selection’ will cause the TF35’s gennakers to disappear, as they have in other fast foiling classes such as the America’s Cup? In fact he thinks it unlikely, particularly when the TF35 is racing on Lake Leman. “In 8 knots you need the gennaker downwind and upwind in 6-8, although by the time you can fly upwind with the gennaker it is time to go to the J1.”

While well known for his professional sailing, Peyron has sailed for many many years as the tactician/coach for private owners, especially in the D35 class. However in French entrepreneur and art supporter Team Sailfever’s Frédéric Jousset, he is working with an owner who has sailed a little and has the fast reactions that come from racing motorcars, but has never competed on such as state of the art yacht before. Understandably as a team their learning curve is steep. “There is a lot of difference between the good and ‘less good’ teams,” says Peyron of the present TF35 competition. “Since the beginning of the season we are at the top of the second division, because we are not consistent yet. There is a big difference in level between the owners - some are not far off being professional now. Our owner right now is discovering it all, but that is alright - it is very good to discover. We would like to have more time for training. Our job is to make our owners happy.”

Peyron is also involved in another of Jousset’s projects – to develop and build a giant 48m long catamaran that will be floating, moving art gallery, following on from Jousset’s project Art Explora - an initiative to bring art to a wider audience.

“I’ll help him find the right place to moor in places like Beirut or Alexandria or Venice. I won’t be its skipper! The more I have grey hairs, he less I want to be skipper of anything! I am not retiring but since the Happy story in the Route du Rhum [Peyron sailed Happy, a sistership to Mike Birch’s 1978 winner Olympus Photo, in the 2018 solo transatlantic race from St Malo to Guadeloupe] I feel like I am a glider with no engine. Inexorably I will land at some point, but I don‘t know where yet. So this [the TF35] is like a pump, so I am flying a bit higher again.”

The only water sports Peyron does for his own personal enjoyment these days is wing foiling. Naturally he was an early adopter, first taking one out off La Baule three years ago and recently he has reached the level where he can manage flying tacks. He compares this to when he first started windsurfing, at a time that was still an embryonic sport (in fact his younger brother Stephane was a windsurfing world champion and crossed the Atlantic on one).

Back to the TF35 and Peyron says he is getting used to its automation system, that is identical on all of the TF35s. He enjoys the smooth take-off this provides. The helmsman is in control of several aspects of the foil adjusts and can dial in ride height of for example 0.5-1. While you might imagine that you increase the ride height when it is wavy, to stay above the waves, but in fact, according to Peyron, you dial down the ride height to ensure the foils remain immersed. Other buttons adjust the pitch of the boat (and its foils), and using this for example Peyron will add positive pitch to prevent nose diving in the bear aways during top mark roundings. Finally there is a control that adjusts the amount of differential between the rake of the rudders – a small amount of negative rake can be dialled into the weather rudder to increase righting moment (as was used in a major way with the AC50 catamarans in Bermuda).

The integration of humans with the TF35 automation or humans fully comprehending what the foil automatic does is also vital to racing a TF35 successfully. Peyron cites the board drops during the manoeuvres. The foil automation only kicks in once the board fully drops but it is also possible to set the rake of the new board so that the speed of the boat will ‘suck it down’. Being able to anticipate how this works takes practice.

While the TF35 is a weapon in the light winds of the Swiss lakes, at the opposite end of the scale Peyron says that the most wind they have been out in is 26-27 knots. “It was bit of a ‘brown trouser’ story on the bear away – in fact we were the only one able to bear away because I wanted to see what the limit was. And it was a big limit! We did 36 knots of speed. For the bear aways you also need a minimum speed because that is the only way to increase the lift and then at some stage there is the famous dead angle between 90 and 100° which is why I tend to have the mainsheet in my hand so you can control it at the same time [as the helm] and you have a fraction of a second to decide if it is good according to the puff.”

No multihull class is complete without Loick Peyron, so it is good that he has found a new home with the TF35, to prolong his ‘gliding’ a little longer.