Spindrift least inconsistent to win day one in Nyon

The opening day of the TF35 Nyon was an unusually high scoring for all but Dona Bertarelli and Yann Guichard's Spindrift.

The French team, helmed this weekend by Xavier Revil, claimed the second race of the day after splitting from the fleet on the start line and making the most of the favourable right. However, in the other two races today, the experienced multihull team got caught up in fleet congestion. In race one, they were covered on every move by Alinghi, and in race three, when the wind did a 90degree shift from southwest to northwest and picked up to 20knots, the French team went right on the second beat, a mistake which cost them the lead. With no score worse than a third, Spindrift leads the TF35 Nyon after day one. 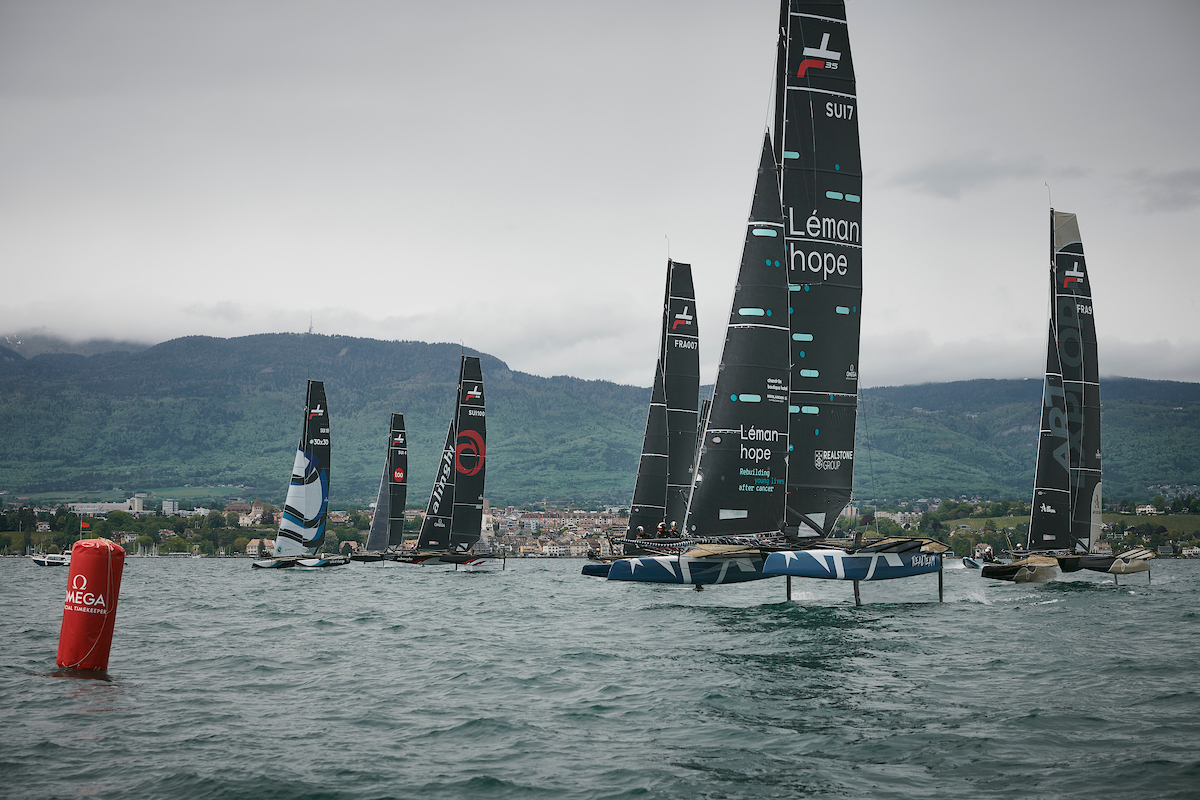 For the owners, today's racing was adrenalin-charged. With the breeze around 10knots for most of the, the new cutting-edge TF35 hydro-foiling catamarans were comfortably flying off the start line and ripping upwind at pace.

Making the most of the strongest breeze in race one Erik Maris and his team Zoulou were well within their comfort zone: "We are happy, we can always do better, but we had a 2 4 5 and that is a good day. We had decent starts, with good speed and big smiles. I'm tired, but it's good tired," explains tactician Thomas Le Breton.

Aside from Spindrift, everyone else had very mixed days. Ernesto Bertarelli's Alinghi, winner of the TF35 Opening Grand Prix just two weeks ago, suffered a technical fault in race one that caused them to drop from third to fifth on the final run. A swift fix between races and Bertarelli quickly recovered for race two in which they took a comfortable second and by race three were back on full Alinghi form to lead the fleet from start to finish.

It was a similar story for Realteam Sailing, who opened the day with a good start pulling out a significant advantage by the top mark and then extended, unchallenged to the finish line. However, they suffered a deep result in race two as they struggled to break through the fleet and finished fifth.

Punching through from the mid-fleet was Frédéric Jousset's Team SAILFEVER helmed by Loïck Peyron, who sandwiched seventh place in today's second race with two fourths, and Ylliam XII - Comptoir Immobilier who was third to Alinghi and Spindrift in race two.

At the end of day one, Spindrift holds a single point advantage over Alinghi and Realteam, who are tied on points in second and third respectively. After which, it is close on the leaderboard with just five points separating Zoulou, SailFEVER and Ylliam XII - Comptoir Immobilier with Zen TOO a further three points adrift in seventh.

Racing is scheduled for a first warning signal at 11:30 tomorrow. To follow the racing live visit tf35.org