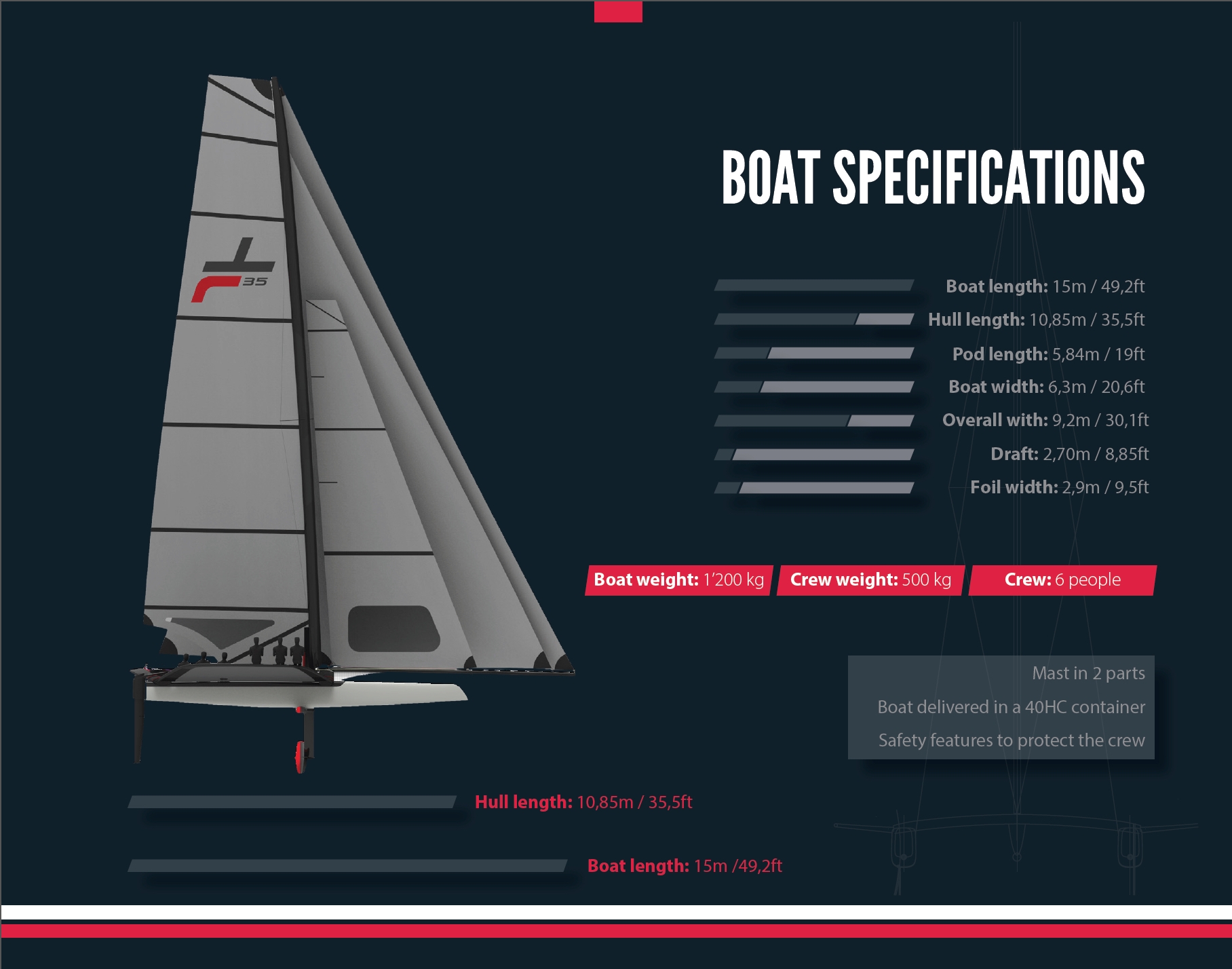 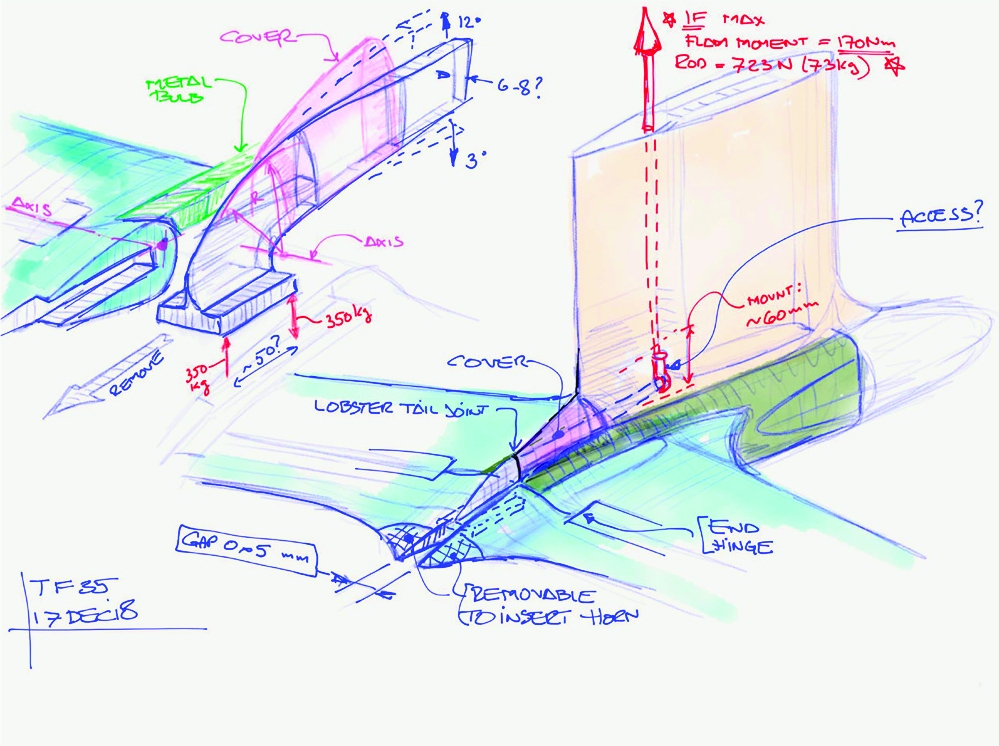 The rudders have a similar flap configuration as the main foils, but the span of the rudder elevator is smaller and the rudder shafts are straight. Each rudder blades fits into a cassette attached to the transom via a gudgeon and pintle arrangement. The overall base setting for the rudder’s rake is set manually by fitting a shim on the bottom gudgeon altering it by 0, 0.5 or 1°. While sailing an electronic actuator controls the flap on the elevator, altering the lift the rudder generates. This determines the overall pitch angle (bow down-bow up) of the boat, which, significantly, also affects the rake of the main lifting foils. Thus trimming rudder elevators in conjunction with foil rake is vitally important.

Rudder ‘differential’ ie the difference in pitch between the leeward and windward elevator flaps, can be dialled in by the crew to provide an extra righting moment boost. However since downward force the windward elevator can potentially be so huge, its use by the crew is restricted to a ‘on-off’ button, the central computer determining the amount of differential dialled in, dependent on boat speed and other factors, to stay well within the boat’s structural limits.

The main ground breaking feature of the TF35 is its automated flight assistance. Way beyond the reaction time of humans, this system looks after the control of the three active foils on a split second basis, ensuring flight remains smooth regardless of wind speed, point of sail, sea state and even during the manoeuvres.

While America’s Cup teams have designed increasingly complex mechanisms to control their foils and rig they use hydraulics, with hydraulic power generated by the crew grinding and with little automation permitted. In comparison since the TF35 is smaller and less loaded, it has no hydraulics Controls for the foils instead operate electrically, via a compact actuator on each foil. The electric actuators, single Lithium-ion battery, computer, data comms and the complex array of GPS, altitude sensors and gyros combined also represents a significant weight saving over an equivalent hydraulic set-up. Battery life is at present around six hours but as systems are refined and continual control of foils is reduced, this will be extended.

Vital to the automation is the quality and speed of reporting of the sensors. A combination of top of the range GPS, ultrasonic altitude sensors and gyros is used continuously to assess the height of the boat, its three dimensional orientation (pitch, yaw and roll – like a plane) and its acceleration in these directions. The computer and its sensors array are stored in a box nicknamed ‘the fridge’.

Crew controls for the foils are limited to ride height and overall boat pitch. Thingese controls are not continuous. They have four different settings from which to choose ride height and pitch. How the computer controls the foils both individually and in combination is in theory completely flexible but its ‘logic’ is pre-programmed by the TF35 Class and only upgradable by them. For example these parameters are the same for every boat and fixed for the season with teams prohibited from altering them.

Crews are developing new techniques to get the best from the software. They can already adjust the foils to provide a brief ‘kick’ to get the boat flying in marginal conditions or to use the flap on the main foil to speed up dropping or raising the foil during manoeuvres. Similarly if they want to duck someone they can trim the bow down to slow them down slightly.

The rig is a carbon fibre rotating wing profile spar which comes in two pieces for ease of transportation. The TF35’s spar is braced by a spreader and a diamond which not only permits the rig to be tuned but weight to be saved from its structure. It should improve the chances of the rig surviving a capsize too.

While the images show the TF35 as having four sails, in fact the sail plan has evolved and only three sails are now used – the genoa has been dispensed with while the self-tacking jib has been enlarged, now filling the foretriangle, while the genniker has shrunk and gained a higher clew, permitting a better view to leeward – a vital safety feature.

Sails are have to be Class Rules compliant with North Sails Switzerland, North Sails France and Europe Sails in Switzerland producing sails for the fleet.

A novel feature, borrowed from the A Class catamarans, is the ‘deck sweeper’ mainsail. The flying centre hull has a wide flat top down to which the foot of the mainsail extends, both lowering the centre of effort of the sail plan and creating an ‘end plate’ for the mainsail, increasingly its efficiency. A side effect of this is that the boom has to be curved, like one half of a wishbone boom. 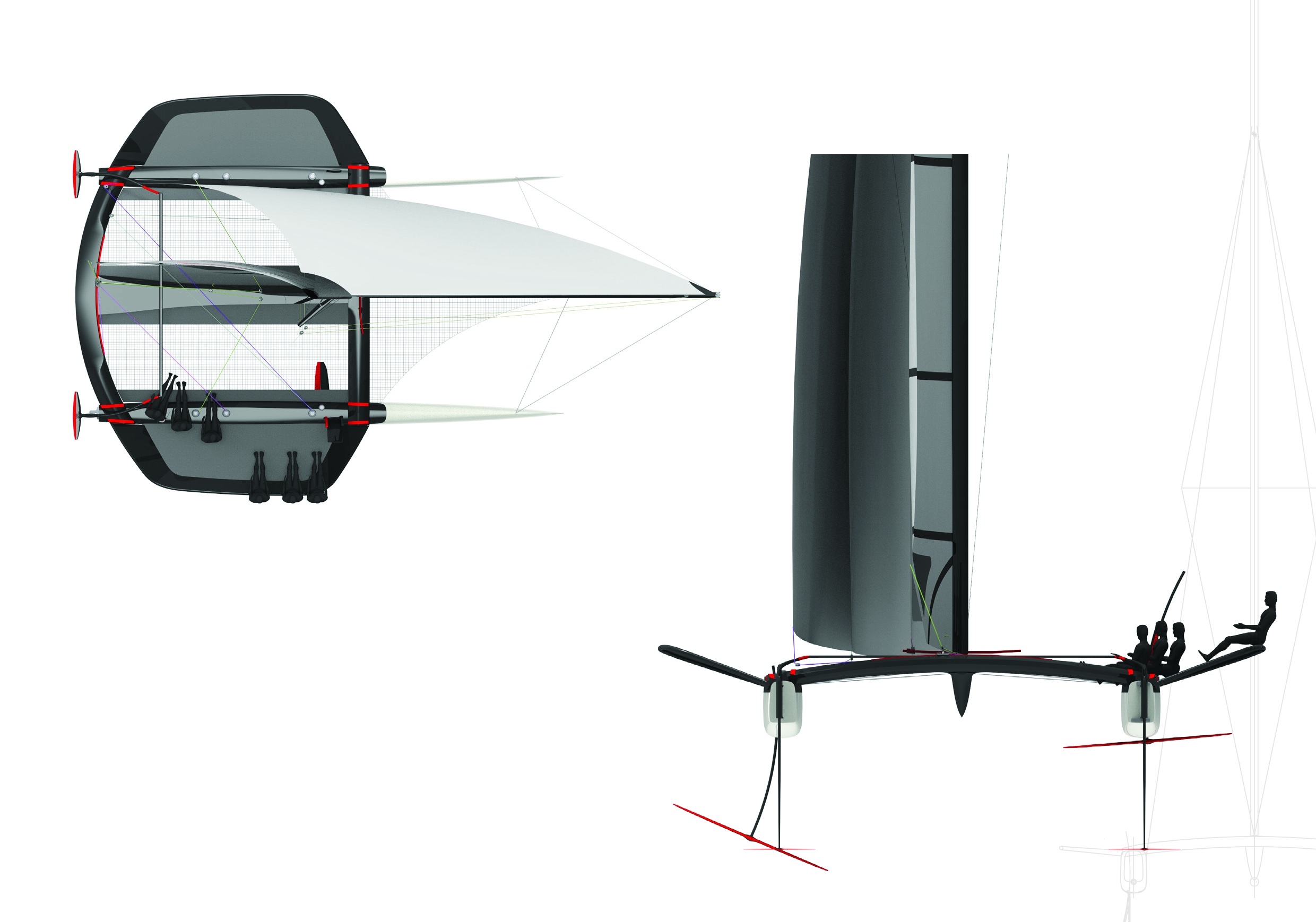 Crew roles include helm, tactician, main sheet trimmer, main traveller, headsails, boards, pit, bowman and flight controller. At present how these roles are divided up among the six crew varies from team to team. For example the TF35s are privately owned boats, but not all owners wish to steer.

To run the TF35 there is a driver seat on each hull where there is the tiller aft (the rudders are connected via tiller bar running forward of the aft beam. On each side there are three winches – for main sheet, traveller and headsail/pit.

Crew have the option of sitting on the rack or on the hull, as thanks to the foils their effect on righting moment is minimal compared to a non-foiling catamaran.

Thanks to the boat’s huge rig, its foils and relatively light weight, the TF35’s performance is exceptional. Outside of the America’s Cup and SailGP it is the only catamarans to both point high upwind and fly, which it can achieve in just eight knots TWS, while off the wind flight occurs in around seven knots or around 12 knots of boat speed. As soon as it pops up onto its foils the TF35 is able to make 18-19 knots upwind. Downwind speeds typically can reach 34-35 knots. These are the preliminary performance figures but will improve as crews develop their techniques.

Great lengths have been gone to into the accuracy of the build, to ensure that all parts of the TF35 are identical boat to boat. This is to guarantee that no team has a technical advantage over another. It also avoids the equipment war typically found in development classes and this therefore prevents costs from dramatically escalating.

The one design nature of the boat also extends to the software dictating how the foils operate for any given set of circumstances. The brains behind this is America’s Cup veteran design Luc du Bois, who via 4G can monitor the boats are in real time as they race. To upgrade the entire TF35 fleet’s software, takes Luc just four minutes.

The hulls and central flying hull were built by leading French multihull builder for the last 40 years - Multiplast in Vannes out of carbon fibre with a Nomex core.

The beams were constructed in monolithic carbon in Nantes, France by Airbus Technocentre which had an autoclave large enough to the beams including the curved aft beam.

The foils and rudders were constructed near Vannes, France. The shafts are hollow but the lifting surfaces and flaps are milled solid carbon fibre with a titanium bulb joining them.

The spars, two piece mast, boom and bowsprit were made by Lorima in Lorient, France

Future Fibres supplied the rigging – carbon for the diamonds, solid carbon for central spine under the bowsprit. Gottiferdi Maffioli is supplying the PBO shrouds.

The flight control system hardware is assembled and supplied by Pixel sur Mer in Lorient.

The TF35 packs down into a custom 40ft container allowing for easy transportation to racing venues across Europe. The mast comes in two pieces, the main foils can be disassembled easily and the target is to be able to assemble the boat in two to three days with pack down complete in one day.

The TF35 Class constantly strives to help owners by developing innovative solutions to facilitate the logistics and minimise costs.

The TF35 Class has an expert technical support staff, who work to ensure every boat is in prime racing condition every time it ventures onto the start line. It can get a boat back on the water just an hour after a major collision.